In the Aftermath of WannaCry: The Answer is Update

The WannaCry ransomware attacks seem to have subsided, but there is still a chance you could be attacked, and you will need to update your operating system and maintain those updates in order to be safe from this and future attacks. 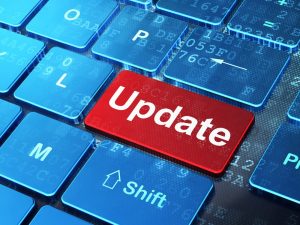 I actually don’t want to cry at all. I mean, a 22-year-old software engineer accidentally stopped the attack, right? I’m safe from cyber crime, right?

Actually, we’re not out of the woods yet. If you use any version of Microsoft Windows, from XP to Windows 10, and you haven’t updated to the newest version to include the new software patches, you are at risk for the same WannaCry/WannaCrypt ransomware cyber attack. You’re also at risk for any and all future attacks that might target you due to out-of-date software.

As you may know, the reason so many systems were affected was due to a vulnerability in Microsoft Windows. The NSA kept it secret, but it was leaked earlier this year. Even though Microsoft issued a critical patch for newer versions of Windows in March, many people and businesses didn’t update, which led to them becoming targets in the attack. Microsoft also released patches for software that was no longer supported, including Windows XP and Windows Server 2003, but again these were only effective if installed before the attack.

The patch for Windows XP can be found here: https://www.microsoft.com/en-us/download/details.aspx?id=55245

If you use Windows Server 2003, or Windows 8, check here: https://blogs.technet.microsoft.com/msrc/2017/05/12/customer-guidance-for-wannacrypt-attacks/

If you use Windows 7 or 10, check for an internal software update. While you’re at it, try and make those automatic. It might cause you to wait a few minutes every once in awhile, but I bet you’d rather spend a few minutes than a few hundred (or thousand) dollars paying a ransomware hacker. And it’s definitely better than losing all the data stored on your computer.

Hopefully, you’re not still using Windows Vista, if you are, you’re on your own. Kidding, but you should consider upgrading to Windows 10, which is the same kernel as Vista, but the supported version. Or switch to a Mac or Linux. Or go off the grid and never use computers again, whichever works for you. The lesson here is to update and stay updated. It’s one of the easiest ways to prevent yourself from being targeted for attack.

If you’ve already taken all the means necessary to update your OS, then take a look at moving to the next step: protecting yourself from future attacks. As mentioned previously, updating your software regularly can really help you steer clear of attacks just like the WannaCry ransomware attack, and anything that could come in the future. It’s always uncertain what’s ahead, but If there is one vulnerability being exploited, it’s highly possible that there is another, or that there will be another.

Microsoft Windows isn’t the only software that can be hacked when not current. Anything has the potential to be hacked the very same way, and we can’t wait for the NSA to report leaked software exploits. Keep your software updated. You won’t regret it. Get better cyber security for your data today! Click here for more info.