Barclays Hosts Super Intern Challenge, Are You One?

Super Interns are sound like sidekicks to your favorite neighborhood CPA. Not as cool as you might think, but Barclays is willing to pay $80,000 a year. Just win their Cyber Security Challenge UK. Want to land a raise that good? Read on to find out how. 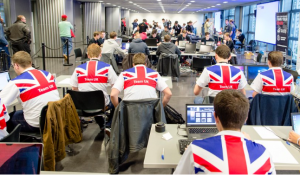 The UK security research firm Research4U was recently hacked. A large-scale ransomware where the sum of £10 million ($13 million) was required in order to prevent data release to the public. The data stolen included proprietary technology, source code, and sensitive client data. All of this happened while the cyber security defense team of the firm was on a team-building canoe adventure. Thankfully, the team has recently brought on a team of interns, who saved the day, and the company’s and client’s data.

Sound too good to be true? A couple interns took out a hacker group that infiltrated a major security firm? A security firm that allows its whole cyber security division to go canoeing? Thankfully, it’s not true, and hopefully, that will never ever happen (take note all security firms: out-of-office team building exercises are not a good idea for cyber security teams. Consider instead a cyber range activity with brownies).

This was instead a test, a competition held by Barclays and the British government. It was a competition to “unearth the UK’s hidden cyber talent”. Later, the winners were hoped to place in public and private sector cyber security roles to fill the critical cyber security skills gap. Since not every company happens to have super interns at their disposal, cyber security analysts are a hot commodity. Salaries can begin at more than $80,000 per year. America, the UK, and everywhere else is desperate for professionals to protect their companies.

Why Is Security So Important?

Barclays PLC is one of the largest banking and financial services companies in the world. Security is (and well should be) a priority for them. Though this competition may only be a recruiting stunt, it’s a great one and shows how important good instinct and training is in the security industry.

Nigel Harrison, of the executives of the event, described it in more detail, saying, “This year’s scenarios have been varied in nature in order to demonstrate the range of cyber threats that this nation faces as well as the sheer breadth of sectors that need cyber security professionals – from banking and finance, to automotive and even retail. Sponsors, like Barclays, make this possible and, in turn, help to open the door to dozens more careers. I would like to encourage any budding cyber security specialist, or ‘white hat hackers’, to consider applying for our competitions. The nation faces a growing cyber security threat, so we are in real need of talent that can keep organisations, and the public, secure.”

Cyber security is important to more than just banks. It should be important to every single company in every single industry. Whether you use the internet for your entire operation or just to connect to your printer, your business can be affected. Let me restate that. Your business can be LOST. Maybe you don’t have millions to host a recruiting competition like Barclays and the UK can do, but you can install some great cyber security tools today for very affordable prices. In fact, you can’t afford not to.