Cyber Security Is the Battlefield of the Future!

Leon Panetta, Former Secretary of Defense, was awarded a prestigious award today at BYU’s Marriott School of Business. I was lucky enough to attend, and take note of his comments. Read about his remarks on cyber security! 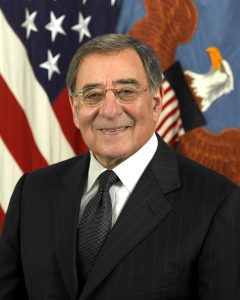 Leon Panetta, former U.S. Congressman, Secretary of Defense and White House Chief of Staff, was recently awarded the International Executive of the Year award by the Marriott School of Business Management at Brigham Young University. In his address to the school, he honored the university’s traditions, and talked about the need for good leaders, and the internet as the battlefield of the future.

This prestigious award has been awarded for more than 40 years to a public or private executive of international recognition and acclaim, who has shown excellent business principles and good moral standards. As the 2017 recipient of the IEI award, Panetta addressed the audience, which was full of local executives, aspiring students, and accomplished faculty.

Panetta spoke about a number of topics, the history of the West and America, and the fragile state of the current federal government. He called for reform in infrastructure, immigration, and war authority. Speaking on wars and the battlefronts we are fighting on, he stated that “It’s more than just hacking and Denial-of-Service. [The Internet] is the battlefield of the future.” He talked about how computer viruses have affected governments, destroyed computers, and how cyber defense systems are more critical than ever.

The threat of a cyber terrorist attack is real, and could hit anywhere. The grid systems in place in all cities are hackable, and often under protected. If the power in a major city was taken over, mayhem could be caused. Don’t think about the traffic lights going down, or the stores not being able to refrigerate food, or communication from internet and cell towers being lost. Instead, think of the cyber defense that could have been in place to prevent it.

“It’s more than just hacking and Denial-of-Service. [The Internet] is the battlefield of the future.”

Don’t think of the Federal Reserve being hacked, or Social Security being looted, or banks being held for ransom. Think of the cyber security necessary to make sure that that won’t happen. Panetta encouraged the new young and future leaders of America to promote better cyber security and preventative solutions to “ensure we have a better life for our children.”

What does this mean for us? The businessmen of America, who might not be young and future leaders of America, but are definitely captains of industry in their own right. I mean, at least we know that the government is aware of DDoS attacks, and if nothing else, they know that cyber security is important. In reality, it’s bigger than that. Clearly these are real issues that the government is dealing with. How they are doing it is another story, so make you you elect officials and representatives who are committed to forward-thinking in cyber security.

There are programs being pushed by Senators to encourage good cyber security practices, and educate the general public. There are laws regulating manufacturing, and business. There are security requirements for banks, data centers, and anyone processing credit cards (did you know that? If you didn’t, check this article out!). Regardless of what the government is doing now, Panetta’s words strike true. The internet is the battlefield of the future, and cyber security is the new army.