Exclusive Cyber Security Camp: What You Need to Know

The USCC is a series of summer camps for the new, bright cyber security minds of the era. If you have what it takes to complete the pre-reqs, you could be recruited by some of the top tech companies in America, and score the career of a lifetime. Learn more here. 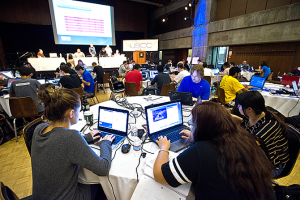 Cyber security is one of the biggest industries in the world, and is growing fast. It is also attracting some of the best and brightest to become cyber analysts, CIOs, and tech ninjas fighting the imminent threats of cyber crime. And now the U.S. is gathering together many of these people together at a summer camp called the USCC (United States Cyber Challenge).

The summer camps are sponsored by the Department of Homeland Security, through the CIS, or the Center for Internet Security, which is a non-profit organization created to “enhance the cyber security readiness and response of public and private sector entities, with a commitment to excellence through collaboration”, according to its website. It collaborates with governments and private-sector corporations to solve prevalent cyber security issues.

Along with the CIS, many companies are sponsoring these events, including Century Link, Lockheed Martin, Amazon Web Services, and Microsoft. One event recently was held in Utah, at Southern Utah University in Cedar City. The USCC Competition was an invitation-only event meant to pit bright cyber securities minds against each other in a free-form environment. The event culminated in a Capture The Flag competition which was created to challenge their cyber attack/defense skills. The week-long camp also featured many different classes, keynote speakers, and activities to educate and train the participants. included Windows memory forensics, Cyber Security program analysis, and more.

The event also included a job fair. This was a place that camp sponsors could recruit the camp’s participants, who could also get a feel for the industry and learn about available careers. Karen S. Evans, the National Director of the USCC and former U.S. Government CIO, said:

The entire purpose of the camps is to seek out those driven individuals who stand out as excellent cyber security defenders, and put them to work in the fastest growing industry in the world, instead of possibly becoming the hackers creating the malware, viruses and other problems that are projected to cost the world more than $4 trillion by 2019.

The camp at SUU went from July 10-14th. The winner of the Capture The Flag Competition was Team Four, consisting of members Nathan Coats, Zach Cutler, Ronnie Miller, and Jason Waits. The competition lasted for four hours, with all the teams trying to answer trivia questions and hack systems, then defend them from the other teams.

Want to sign up for one of these camps? As was mentioned previously, you have to be invited, and invitations are given out based on your Cyber Quest score and time. Cyber quest is a series of tests created to determine worthy candidates for the camps, and potential cyber security experts. If you’re 18 or older and think you have what it takes, go ahead and take the Cyber Quest Challenges, and see if you qualify for an invitation to USCC. If you’re qualified, Fibernet is always hiring driven individuals to defend enterprise infrastructure. Get Hired Here!

Learn more about the cyber security industry by following this blog, updated daily!