Your Loss, Their Gain: Is Equifax Making Secret Profits?

Equifax again? Richard Smith goes in front of the Senate Banking Committee, and Senator Warren accuses him of profiting from the breach. Learn more here. 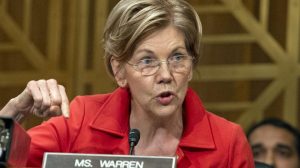 When a major cyber security breach occurs, it’s talked about for weeks after it’s over. It’s what you do. When you switch to Geico… Kidding, this isn’t one of those ads. However, the Equifax breach is still all over the news, as new stories are uncovered. Check out this headline, for example. It comes from Reuters:

Senator Elizabeth Warren (D-MA), is a known for consumer advocacy. She is on the Senate Banking Committee and has voiced her opinion many times in front of CEOs and Chairpeople. This week, she spoke out against former Equifax CEO Richard Smith, who went before the Capitol Hill Committee for the second time this week.

Senator Warren stated that “The breach of your system has actually created more business opportunities for you.” I’m sure you are aware that Equifax is a credit-reporting agency, and one of the largest in the industry. Slightly less well known, however, is that Equifax also provides security services like credit protection and monitoring services.

Sounds conflicting? That’s what Senator Warren said. See, although millions of Social Security numbers were lost in their cyber security breach, Equifax didn’t lose much. In fact, predictions show an occurring of profit due to the breach. That’s basically the definition of a conflict of interest.

“Equifax is making money, millions of dollars off its own screw-up and meanwhile the potential cost to Equifax are shockingly low,” – Sen. Warren (D-MA)

It is not publicly known how many of Equifax’s customers were directly affected by the breach, but it’s safe to say that many if not most of them were. The real question is whether Equifax really had an interest in protecting their data. I mean, it’s not every day that you get hacked, and profit from it. Oh, wait, that NEVER happens.

It is crazy to think that Equifax is set to profit from this breach. Richard Smith isn’t since he retired last week, but he still has some things to say. “The company has been around for 118 years and for most of those 118 years has done good things,” Smith said.

Equifax has a service that allows users to “lock” and “unlock” their credit reports. Warren disagrees about the effectiveness of the service and states that only a law change can really protect the people. “It only applies to Equifax. Consumers are now vulnerable to the loss of their data and some thief going through one of the other credit reporting agencies. That’s why we need to change the law. We need to make it in place forever and make sure consumers have control over their own data,” she said.

I don’t think it’s right that Equifax should be allowed to have this conflict of interest. Cyber security is so important, and should not be compromised due to economic interest. In fact, no one’s cyber security should. If you or your company is having growing pains due to costs of cyber security, think carefully before reducing or cutting out anything that could potentially save your business, because, for the rest of us, cyber crime does not profit us anything. It kills.