Note: All kinds of businesses are growing across Utah, not just manufacturing businesses. Be sure to support your new Utah startup with screaming fast business Internet from Fibernet, at an affordable and stable price.

The national and worldwide economy is leading to a downturn in manufacturing everywhere, even China, but last month Utah’s manufacturing actually grew.

We’ve highlighted Utah’s strong tech economy and what a great place it is for startups and entrepreneurs, but one strength Utah has that is particularly surprising is manufacturing. It’s more surprising perhaps because while tech and startups are doing moderately well in multiple places around the United States, manufacturing is an industry that is tanking just about everywhere, even internationally. And yet, Utah’s manufacturing statistics rose last month to the highest they’ve been in the past five months. 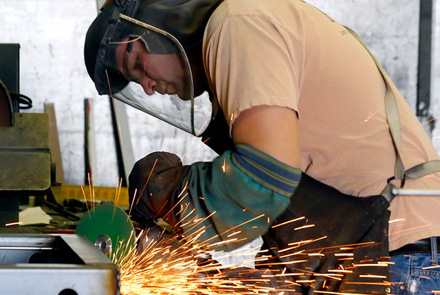 The continual climb is attributed to the state’s oil wells and energy industry. On Monday, the Goss Institute for Economic Research said the index of business conditions in Utah went from 55 in July to 60.6 in August. Note that anything above 57 is categorized as robust activity. A representative from the Goss Institute went on to state, “The survey results were a lot stronger than I anticipated, stronger than the national numbers. It’s energy and energy-related, but also manufacturing. It’s pretty positive.”

Due to the ebb and flow of the industry, predictions are coming in that the numbers will again dip in September, however. Trends most often find that the growth stall isn’t any fault of the manufacturers however, but due to the current political climate. The representative also said, “I don’t see how it can continue, with the U.S. economy really pulling back. It could continue if you got a strong uptick in housing, but I don’t see that happening.”

Outside of Utah, in the nation at large, factory activity fell for the third month in a row, meaning new orders, production, and employment all dropped. A trade group of purchasing managers recognized as the Institute for Supply Management said on Tuesday that the national index of manufacturing dropped in August to 49.6. In July, it was at 49.8. The August reading makes it the lowest index rating in the past three years. As a reference point, any index below 50 is categorized as contraction in the industry. Manufacturing on average around the entire world, not just in the United States, is also declining.

The downturn in manufacturing just about everywhere is due in large part to reduced consumer spending, particularly for large machinery and capital goods. Even in the manufacturing powerhouse of China, manufacturing slowed down in August. The same story is happening in Europe as well. Senior U.S. at Capital Economics Paul Dales commented that a myriad of factors are influencing all manufacturing markets, like the tax increases and spending cuts in the U.S., the recession in Europe, and the slowdown of the market in Asia.

Dales went on saying, “the manufacturing index typically needs to fall to about 43 to suggest the broader economy is shrinking, according to the ISM. Still, growth at or below 2 percent is not enough to significantly lower the unemployment rate, which was 8.3 percent in July.”

Note: In July, Utah was recognized as the second best state in the nation for providing home Internet access to its residents. Look into getting home Internet with Fibernet today to get great download and upload speeds from your living room.

The Federal Reserve is meeting next week, and it’s likely that discussing ways to boost the manufacturing economy in the nation will be on the agenda. After the ISM data was released, the stock market fell. The Dow Jones industrial average went from 96 to 55. However, despite the gloom and doom, the ISM report showed that factories were still hiring in July, it just slowed down. Factories added 163,000 jobs which was the best hiring month since February for the industry.

And yet in the middle of all of this slow down, Utah’s manufacturing rate grew in August. Again, it goes to show the growth and stability that doing business in Utah can provide for your company. To read more about that, check out our blog post about Utah’s improving economy amid the downturn of the national economy.