Note: Fibernet has been one of the most adamant supporters of fiber-optic Internet. Find out what other break through solutions Fibernet has to offer.

Although many claim it a dystopia, UTOPIA is alive and kicking.

Only ten years ago, I remember when two salesmen sat down in my living room with my mother and father pitching a product which was taking the entire neighborhood, nay, city by storm, iProvo. iProvo was one of the companies which offered Provo residents access to the newly laid fiber-optic Internet. One of the salesmen said to my father, “Light is what carries the information through the cables and into your computer. That means your Internet will be as fast as the speed of light.” My father, who had been as surly and contrary as he could throughout the whole presentation, considered this statement the straw that would break his back, gave him more than his two cents on their company, and called the meeting to an end. 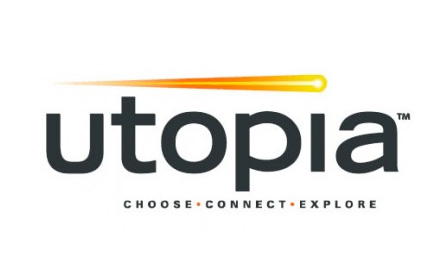 I was disappointed; all the rest of my friends were getting plugged into this “freaking fast” fiber-optic Internet and our house was, yet again, stuck with dial-up. Being able to play multi-player games, chat with friends, enjoy online video and music streaming? Not a chance. I was in an oil lamp-lit house while the other kids were reveling in electricity. While fiber optics was welcomed into town as the monorail was to Springfield, it has since taken some hits after its fair share of debacles and misunderstandings. My father, to this day, is proud to have not “bought that fiber-optic mumbo jumbo.”

After jumping through the hoops of a legislative audit, almost ran out of town on a rail by the citizens of Orem, and suffering the slings and arrows of big name telecom providers, it would be easy for one to think that UTOPIA and the fiber-optic vision is being routed and is on its last leg. In all actuality however, UTOPIA continues to make enormous progress and is on its way to obtain its lofty goals.

Fiber-optic technology is estimated to be reaching its tipping point and sweeping across the state, powering the most modern innovations such as smart grids, remote education, telemedicine, public Wi-Fi, etc. UTOPIA is poised to lead the various cities it is associated with to an improved quality of life and help the transform into some of the most modern communities. Like every other innovation of its type (electricity, indoor plumbing, motorized roadways, telephone networks), it had its stumbling blocks and came under some heavy fire. But just like the electricity making that light bulb glow in your desk lamp, fiber-optic Internet may just become as integral to streaming information to your home computer.

In 2008, UTOPIA made a few changes of its own, forming an entirely new management team in control, consolidated the majority of day-to-day operations, and raised the bar on the criteria for service providers who give access to the fiber-optic network. They have also implemented a new business model, offering new services and pricing which should up the average revenue per user by 40 percent. If UTOPIA can make this much of a change and still stay in the game for almost another five years, it shows it’s staying afloat.

Note: Fibernet has qualified by UTOPIA’s standards as a fiber-optic provider. Find out how to connect your home or business to the awesome connectivity that awaits you has to.

Kane Loader, chairman of the board of UTOPIA, believes that, “UTOPIA has built the most advanced telecommunications network in Utah.” He explains further, “Its redundancy and reliability have made UTOPIA very attractive to best-in-class Internet service providers and to major businesses that value our 99.999 percent up time. The network's unique open-access nature enables and encourages competition and offers an alternative to the private, closed networks of incumbent telecommunications providers.” The 1GB per second connection, which is 200 times faster than competing Internet connections, isn’t quite as wide spread as most people would like, but as we become more and more dependent on streaming media and our data is leaving our hard drive and is entering the cloud, fiber-optic will become readily available. It appears that fiber-optic Internet is the way of the future, if we let it be.